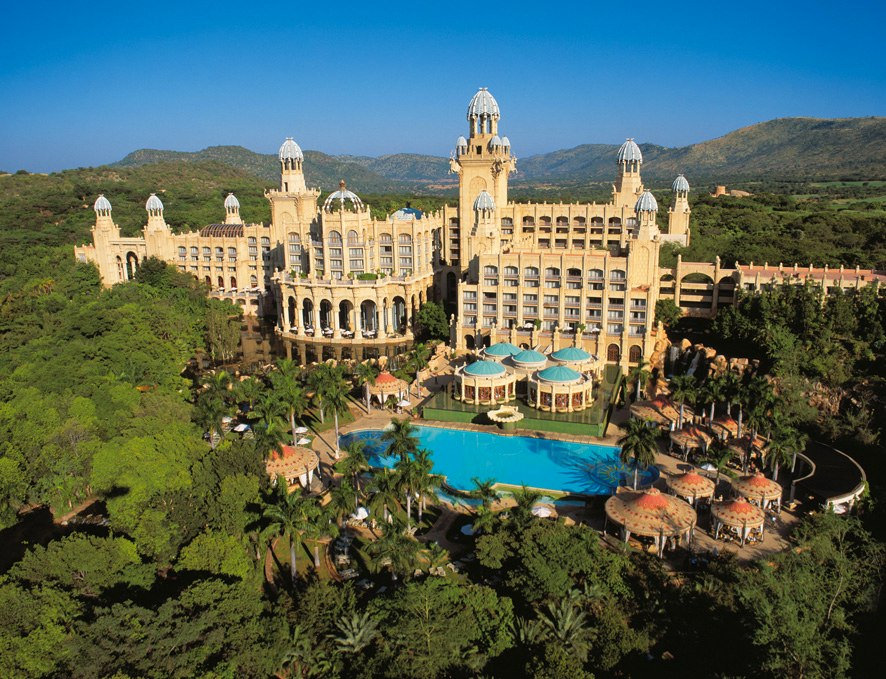 Is Sun City on your bucket list? Rent one of our premium SUVs and roll up to the The Lost City in style.

With Pilanesburg National Park right on the door step, and Madikwe Game Reserve just 3 hours away, not to mention two of Gary Player’s legendary Golf Courses in your back yard, Sun City is the place to be! From Johannesburg’s O.R. Tambo Airport, the route to Sun City is about 2 hours, going through Pretoria, using the N4 and R556. As you drive, you will notice the city fade away as the savannah takes over. Sun City is nestled far from the madding crowd in a location that keeps growing to encompass the many activities on offer.

We suggest driving through the major towns on the route and getting straight to your destination. There will be plenty of time on the way back to stop for a few days in Pretoria or do some sight seeing in Johannesburg. Sun City is a family leisure resort offering rest, relaxation and full on adventure. It was built by property magnate, Sol Kerzner in 1979 and forms part of the world renowned Sun International Group, which Kerzner founded in the 1960s.

Why is the resort important to the history of South Africa? Well, get this!

Sun City, and the Lost City in particular, has since become a popular film destination for Hollywood and Bollywood movies. Another popular venue is The elephant courtyard at the Lost City. It has the capacity to seat 400 guests in an elegant outdoor setting. During the day, you can see tourists taking their photo next to the majestic, playful, bronze statue of Shawu, Sun City’s royal elephant.

The idea behind Sun City is an adventure paradise.  Spend days lounging in the Valley of the Waves - a fun, family waterpark that has a motorised wave pool and a lazy tube river where kids and parents can float down without a care in the world.

Speaking of kids, there’s loads to keep the kids entertained and racing off to the next adventure. Play mini golf and paintball, enter the lost city maze or have a blast at the games arcade. Or, if the heat is too much, Sun City has a movie zone and theatre complex offering incredible shows.

Explore the grounds of The Lost City, which is built to look like a grand palace hidden in the middle of a jungle landscape. Be on the lookout for sculpted ruins, waterfalls, rock pools and sweeping stone staircases. The Lost City took 3 years to build (including the jungle landscape) and officially opened in 1992 to rave reviews. In fact, each hotel at Sun CIty, has its own pool complex and restaurants. There is also a shuttle that goes between the hotels and the time share. That’s right, you guessed it! There is a Safari waiting for you at Sun City. Pilanesburg National Park is home to the Big 5 and its own host of adventure activities. You can book through Minakwe Game Trackers to go on a hot air balloon ride overlooking the entire park. Or, quad bike through exciting trails, do a self-drive safari through the grounds or learn how to shoot a bow and arrow like a pro with an archery lesson on the grounds.

Which animals will you be able to spot as you stealthily move through the park? The Big 5 - lion, elephant, leopard, rhino, and buffalo - are on full display. You will also be able to see cheetah, wild dogs, zebra and over 300 types of bird species.

Or, How About a Game of Golf? For the person who enjoys the great outdoors without tracking wild animals, there are two world renowned golf courses waiting for you. The official home of the Nedbank Golf Challenge, The Gary Player Golf Course was launched in conjunction with the initial plans for Sun City, all the way back in 1979.

The course adheres to strict US PGA regulations and attracts golfers from around the globe. It is a strictly walking course with 18 holes, par 72 with a country club in the grounds offering great meals for your halfway cuisine. There is also a spa on the grounds to relieve tired muscles after a great game of golf.

The terrain for this course resembles more the bushveld than the serene trees and green grass of The Gary Player Golf Course.

Built in 1993, the course incorporates the jungle themes of the Lost City Palace. There are dramatic lakes and waterfalls, in particular a series of lakes separates the ninth hole from the finishing hole.

Golf Carts are part of the fun on this course, drive along the wide fairways of this 100 hectares of golfer’s paradise. If you’re not ready to let go of the jungle then a short drive north to Madikwe Private Game Reserve is the next place on your list. Embrace the adventure with a premium 4 wheel drive vehicle to master the gravel roads in the savannah. As they say, you can choose your own adventure. You have the option of staying at a state of the art camping site or a luxury safari lodge. Madikwe Game Reserve is a hidden gem that you definitely need to check out. And, having the luxury of your own rental vehicle means you can decide to visit for the day or take your time and explore the natural area for a couple of days.

You will be able to spot the Big 5 and the endangered wild dog pack. And, you can also go on rambling hikes close to the main site. You can also book guided safaris with the lodge. The guides can help to spot animals and tell you more about the history of the area Now that you’re on the way back to Johannesburg you have the perfect chance to stop in Pretoria and stretch your legs.

Check out the Union Buildings and the Voortrekker Monument. You can also take a turn through Hatfield or stop at Menlyn mall for a bite to eat. South Africa offers the world to daring travellers and before you know it, your vacation has flown by in the blink of an eye. Our Joburg to Sun City route packs in adventure, safari and family fun. Rent with Woodford and take a trip into our African Savannah. Go on, have an adventure.